Before we were able to begin our adventures in Beijing, I needed to get into the country first! Here’s the picture I tried to take during our Seattle-Seoul flight, the one that wound up flashing our entire section of the plane..

When we got to our layover in Seoul, South Korea, we had to fill out a health questionnaire to make sure we wouldn’t bring H1N1 (swine flu) into the country. They also took our temperatures on the way off the plane. 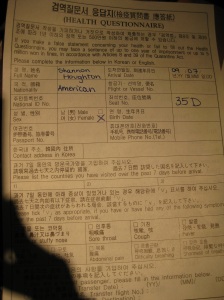 Did I mention that we had a 10-minute sprint across the airport to make our connecting flight? Because we did. It was crazy.

The morning after we arrived, we went to a million places, so it seemed. One of those was the Forbidden City, which is where the emperor used to live and do a lot of his business. Now that there is no longer an emperor of China, it’s technically called the Palace Museum, and it opened to the public in 1925, 499 years after it was completed. Here’s the street approaching the city. 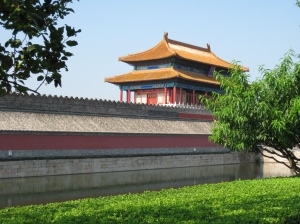 This is the North Gate into the city. It’s not the main way in – it’s actually the entrance where ladies used to wait to be chosen for jobs with the Emperor.

Here’s Caryn, me, and Nicole about to enter the gate. We were not waiting to be chosen for jobs with the Emperor. We’d much rather stay teachers.

This is one of the doors at the gate. There are nine knobby things up and nine knobby things across the door, because nine is the most auspicious number in feng shui. Auspicious is basically a fancy way of saying lucky. Chinese people often believed that the way their surroundings were arranged had an impact on the fortune they had in their lives.

Also, just for size comparison, here’s my hand on one of the knobby things.

Now, the gates into the different sections of the city aren’t just like giant doors. They have little steps you need to take in order to get through them. That’s because the Chinese used to believe that spirits tried to get into their homes, but the spirits were so small that they couldn’t jump over the steps.

Before you go into the main part of the city, you pass through the garden. The garden is honestly where the emperor went “to play,” as our tour guide put it. There are trees in the garden, but none on the inside. That’s because if the Chinese character for “tree” is added to “palace,” it becomes “prison.” And people usually prefer not to work and live in prisons.

If you want to go to the Imperial Tea House, you can also get a Coke. 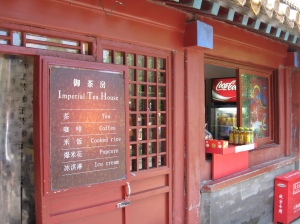 Here’s me by one of the side gates. There are more than 8,000 rooms in the city. That means that if a baby was born in one room, then spent every night of its life in a different room, he or she would be 27 years old by the time they slept in every room.

I wanted this man’s shirt.

This is where the Emperor conducted his important business. It doesn’t look terribly comfy, but it is quite lovely to look at. 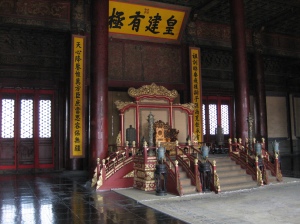 Our tour guide called this the “oldest business complex in China.” I’d rather work here than a skyscraper.

Many of the buildings in the Forbidden City are made of wood. Fire destroyed a large part of the city just 100 days after it opened. The Emperor at the time completely freaked out (he thought it was a sign that he was doing a bad job), and so to make sure that things wouldn’t burn to the ground again, he put 400 of these pots all around the city. They were filled with water just in case another fire started. 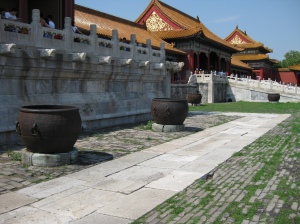 Here’s the gate leading out of the Forbidden City. See that big opening in the middle? Only the Emperor could use that gate. I think I’d feel kind of weird having a gate that had no other purpose than to allow me into and out of my house. Maybe that’s why I’m not a Chinese emporeress. The opening to the right was for royal family members, and the one to the left is for high-ranking officials. Low-ranking officials had to use the opening on the far right (there’s one on the far left too, but it’s not in the picture). Normal people couldn’t come in at all. 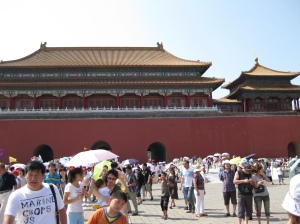 This gate leads to Tienneman Square, which I’ll cover in my next post! (Hopefully… We leave for Xi’an tomorrow and I don’t know what my Internet will be like)

Today we went to the Great Wall, which absolutely blew my mind into a thousand pieces. And also my calves and thighs. I’m kind of not sure how to get up from the computer once I’m done with this. J I miss you all! Be good, and take care!